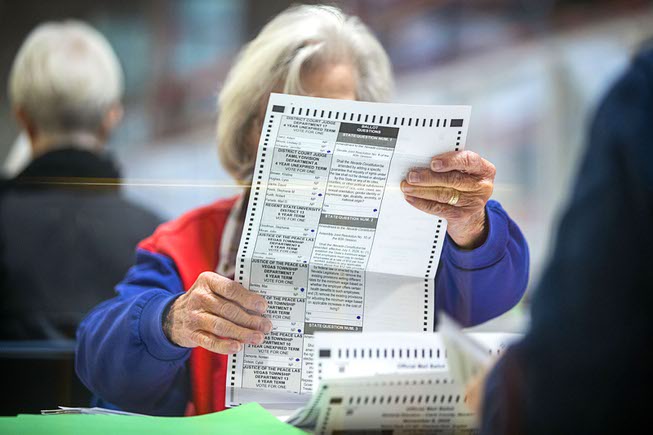 An election worker inspects a mail-in ballot in the count room at the Clark County Election Department in North Las Vegas Saturday, Nov. 12, 2022.

When a panel of the Democratic National Committee meets next week in Washington to solidify the party’s calendar for the 2024 presidential primaries, Rebecca Lambe wants those leading Democrats to have Nevada first and foremost on their minds but more importantly first on their list.

Lambe, a Nevada Democratic strategist,says Nevada is the only state that checks all of the party’s requirements as it decides which states hold their primaries first.

“No other state meets every key aspect of the DNC’s own criteria for the early window of diversity, competitiveness, and accessibility except Nevada,” Lambe wrote in a memo on the online publishing platform Medium. The memo was also shared with key Democratic leaders, including members of the DNC’s Rules & Bylaws Committee, which will meet Dec. 1-3 in Washington to finalize the primary calendar for 2024.

Lambe, a longtime aide and chief strategist to former U.S. Sen. Harry Reid, D-Nev., echoed what has long been stated by Nevadans advocating for their state to have the first -in-the-nation primary: Nevada’s diversity — unlike Iowa in the Midwestor New Hampshire in the East— mirrors the nation. Iowa traditionally has been the site of the first stop on the presidential election calendar with its caucuses; New Hampshire for years has been home to the first-in-the-nation primaries.

According to a resolution passed by the committee in April, the party is seeking a new presidential nominating process that more accurately “reflects the diversity of the party” and allow candidates a chance to meet a more diverse voting bloc.

Nevada has a large share of working-class voters with a strong union presence and large Latino, Filipino and Asian American populations. The memo cited a demographic diversity — from the Las Vegas and Reno metro centers to tribal and rural communities — that can be predictive of primary victories across the country.

“The voters who make up our electorate represent the future of the Democratic Party if we want to win national elections: working class Latino, Black, Asian American, Native American and white voters. Simply put, we cannot win 270 Electoral votes or Congress without prioritizing the diverse, blue-collar coalition that Nevada represents,” Lambe wrote.

“If you’re a presidential candidate and you can win in Nevada, you have a message that resonates across the country,” Cortez Masto said on MSNBC earlier this week, calling the state “a microcosm of the rest of the country.”

In laying out her argument, Lambe also wrote that Nevada had strong voting laws and an accessible size

Judith Whitmer, the chairwoman of the Nevada Democratic Party, said the state’s Democratic apparatus would support any legislation needed to put Nevada first in the nation for its nominating convention. The…

David Axelrod doubles down on doubts about Biden 2024 run: ‘If he were 60, not

Pro wrestlers used to love to be hated. But today’s political tensions make…

Musk says he will support DeSantis if Florida governor runs…